Is That Fur You're Wearing Really Worth It? China's Cruel Fur Industry. 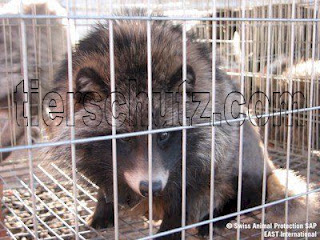 Yes, furs are beautiful, and can keep people warm in winter, but at what cost? Is it really worth donning a fur, fur trimmed coat or hat, when the animal you're sporting could very well have been skinned alive? China supplies the bulk of the world's fur trade, and because the cost is cheaper, the fur industry eats it up. Even though your coat might say made in France, the fur more than likely originated in China. A country that has no regulations regarding the fur trade, and certainly not regarding animal cruelty.

A Swiss animal protection group (SAP) revealed that they had more than 6 hours worth of video footage, and over 500 photos of animals being knocked unconscious (to save the pelt) and being skinned alive, oftentimes the heart still beating. And it's not just foxes and minks, it's cats and dogs, as well. I understand that there are cultural differences with respect to how we all perceive animals, but cruelty is unforgivable under any circumstances. We are the caretakers of our world, and that includes caring for our animals, as well. Smashing a raccoon dog's head on the ground, to knock it unconscious before skinning it alive, is unconscionable.

But we, the consumer, are as much at fault with our demand for furs and fur accessories. Without the demand there would be no need.

You might reconsider buying those fur trimmed gloves, the next time you are out shopping, knowing that animal might have died in agony.

The following is a video of Heather Mills, produced by PETA (whose methods I often find questionable), that has some very disturbing images. You might want to close your eyes, if you choose to play it.

Posted by Incognito at 3:52 PM No comments: Links to this post

Is That Bacteria On My Lemon Slice?

I love lemons and limes. Those tangy, mouth-puckering fruits get placed in everything from my salads to that ice-cold glass of water. The first thing I ask for, when eating out, is a glass of ice water (or Perrier) with a slice of lemon or lime. What's a glass of cold water without some lemon?! But I have to admit that after watching the video below, I do think twice about requesting it now.

According to microbiologist Anne LaGrange Loving, a professor at Passaic Community College in New Jersey, those slices of lemon we get at eateries contain everything from fecal bacteria to micro-organisms that cause staph infection. After noticing a waitress' fingers dip into her soda, along with her lemon, Loving was inspired to conduct a study. Of the 76 lemons (from 21 New Jersey restaurants) that were examined, a whopping 77% (or 2 out of 3) had some form of bacteria. One had a grand total of 6 different micro-organisms, 3 of which are found in fecal matter. Though some had nasties only on either the rind or the pulp, 29% had them on both.

Although it's probably nothing too much to worry about, those with compromised immune systems should always be careful.

AT HOME: simply scrub the lemon (or lime) in soapy water before use, and make sure you slice the lemons using a clean cutting board, knife and clean hands.

AWAY FROM HOME: Ask how the restaurant handles their lemon slicing, although it's probably simpler to just say no. But, for those who need that extra zip in their water and don't want to risk getting sick from a contaminated lemon slice, there's a product you can buy at truelemon.com. It's an all-natural, crystallized lemon and lime product that comes in packets, or a shaker. Although I haven't tried it yet, it sounds like an interesting alternative.

Posted by Incognito at 1:29 PM No comments: Links to this post