This has apparently been around for several years, but seems to only have gotten traction recently, especially on Facebook. Another lovely pay-it-forward-type ad that seems to have gone viral. It's a lovely reminder that it doesn't take much to be kind or loving. And we  reap what we sow when it comes to love.

The credits at the end include the following in both English and Czech:

and a biblical reference to Matthew 22:39 "Love your neighbour as yourself"

and Křižovatka which appears to be a Christian organization based in the Czech Republic. But no-one quite knows who created it.

Music is by Noah and The Whales "Give A Little Love"

Posted by Incognito at 10:58 PM No comments: Links to this post

Email ThisBlogThis!Share to TwitterShare to FacebookShare to Pinterest
Labels: being kind to others, Generosity and Giving, Keys to happiness, Pay it forward

Food fraud is up 60%- everything from diluted pomegranate juice and olive oil, to lawn grass in tea bags, to escolar replacing white tuna fish, which can cause stomach issues in some. Apparently, 7% of the food we buy in stores is fraud food.

The U.S. Pharmacopeial Convention (USP) has been conducting research and it isn't pretty.

In a new database to be released Wednesday, and obtained exclusively by ABC News today, USP warns consumers, the FDA and manufacturers that the amount of food fraud they found is up by 60 percent this year.

USP, a scientific nonprofit that according to their website "sets standards for the identity, strength, quality, and purity of medicines, food ingredients, and dietary supplements manufactured, distributed and consumed worldwide" first released the Food Fraud Database in April 2012.

The organization examined more than 1,300 published studies and media reports from 1980-2010. The update to the database includes nearly 800 new records, nearly all published in 2011 and 2012.

100% lemon juice is rarely over 35% of actual juice. Some were found to contain less than 10%. The rest is water and sugar.
Olive oil is not always pure. That expensive Extra Virgin Olive oil is oftentimes mixed with cheaper  oils.
Pomegranate juice was found to be be diluted with pear or grape juice, and in some cases no pomegranate juice at all.

Tea can contain fern leaves or lawn grass. No wonder some are so tasteless.
Coffee, honey, milk and maple syrup can also be easily diluted with other ingredients.

Be warned that if the cost of something that is usually expensive is cheap, walk away. It's more than likely adulterated in some way. Not that buying something expensive will guarantee you are getting the pure product.

Unfortunately, it's almost impossible to tell if something is mislabeled, so if you want lemon juice, buy a bag and juice them yourself. That's what we do.


In case you want to check a particular food, USP has a searchable database.

Posted by Incognito at 9:02 PM No comments: Links to this post

It's Rev. Martin Luther King, Jr's birthday. He had an amazing way with words, and an incredible gift to inspire with those words.

Here are some of the most memorable.

"I have a dream that my four little children will one day live in a nation where they will not be judged by the color of their skin, but by the content of their character."

"History will have to record that the greatest tragedy of this period of social transition was not the strident clamor of the bad people, but the appalling silence of the good people."

"A nation or civilization that continues to produce soft-minded men purchases its own spiritual death on the installment plan."

I say to you that our goal is freedom, and I believe we are going to get there because however much she strays away from it, the goal of America is freedom.

"Almost always, the creative dedicated minority has made the world better."

"Rarely do we find men who willingly engage in hard, solid thinking. There is an almost universal quest for easy answers and half-baked solutions. Nothing pains some people more than having to think."

"Every man must decide whether he will walk in the light of creative altruism or in the darkness of destructive selfishness."

"Faith is taking the first step even when you don't see the whole staircase."

"Have we not come to such an impasse in the modern world that we must love our enemies - or else? The chain reaction of evil - hate begetting hate, wars producing more wars - must be broken, or else we shall be plunged into the dark abyss of annihilation."

"I have decided to stick with love. Hate is too great a burden to bear."

"Injustice anywhere is a threat to justice everywhere."

"Life's most persistent and urgent question is, 'What are you doing for others?'"

"Never forget that everything Hitler did in Germany was legal."

"The time is always right to do what is right."

and last but not least:

Crossposted on my other blog.
Posted by Incognito at 9:17 AM No comments: Links to this post

In the lead during a race last December, Kenyan Abel Mutai- the London Olympics winner of the bronze medal for the 3,000 meter steeplechase- made a huge mistake as he approached the finishing line. Anaya was coming in second when Mutai thought he had crossed the finish line about 10 meters before he had. As Anaya caught up he lagged behind Mutai gesturing him on to win. Anaya could easily have taken advantage of Mutai's mistake, but made the conscious choice not to.


"But even if they had told me that winning would have earned me a place in the Spanish team for the European championships, I wouldn't have done it either. I also think that I have earned more of a name having done what I did than if I had won. And that is very important, because today, with the way things are in all circles, in soccer, in society, in politics, where it seems anything goes, a gesture of honesty goes down well."


The story took a month to gain traction:

"..unfortunately, very little has been said of the gesture. And it's a shame. In my opinion, it would be nice to explain to children, so they do not think that sport is only what they see on TV: violent kicks in abundance, posh statements, fingers in the eyes of the enemy ..."


Of his actions, Anaya said:

“I didn’t deserve to win it." “I did what I had to do. He was the rightful winner. He created a gap that I couldn’t have closed if he hadn’t made a mistake.”


As for what Mutai thought of Anaya's kindness:


“We talked a little bit but we didn’t understand each other much,” the Spaniard told Catholic News Agency. “He thanked me for allowing him to win.”


Anaya has had a ton of positive response for what he did, his coach on the other hand wasn't too thrilled.

“The gesture has made him a better person, but not a better athlete,” Martin Fiz told El Pais. “He has wasted an occasion. Winning always makes you more of an athlete. You have to go out to win.”

He's wrong, it was the right thing to do and just proves that sometimes it's far more important for humanity to trump competitiveness. This is how we win the hearts and souls of the people we share this planet with. He did a good deed, and that will go much further when he meets his maker than any amount of medals or trophies would. What he did will not only have a positive impact on Mutai, but everyone who watched it first hand, and those of us who are reading about it now.
Posted by Incognito at 7:12 PM No comments: Links to this post

Ten Ways To Love- From the Bible 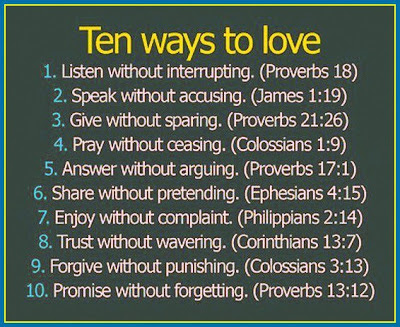 But I think the most inspiring of them all is 1 Corinthians 4-8:

4 Love is patient, love is kind. It does not envy, it does not boast, it is not proud. 5 It does not dishonor others, it is not self-seeking, it is not easily angered, it keeps no record of wrongs. 6 Love does not delight in evil but rejoices with the truth. 7 It always protects, always trusts, always hopes, always perseveres.

Love freely and unconditionally. It truly is the source of all good.

Source: Bible Gateway
Posted by Incognito at 8:14 PM No comments: Links to this post

Email ThisBlogThis!Share to TwitterShare to FacebookShare to Pinterest
Labels: 1 Corinthians 4-8, Keys to happiness, Take the time to love, unconditional love 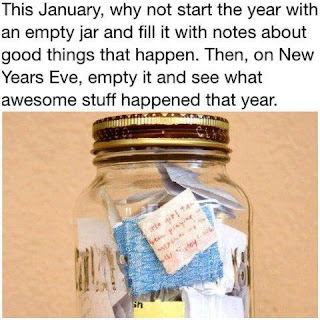 Usually we start the New Year off with resolutions, which is a good thing.  Make them working goals to reach by year's end. That takes a little pressure off and gives you a whole year to work on those things that need to be worked on.

Another thing you might consider is a gratitude jar.  The above floated around on Facebook prior to year end and it looked like a wonderful idea. I happen to have one, so decided to start one of my own.

It doesn't have to be a jar, you could get a nice decorative box and place your pieces of paper in there.

Before bed just remember to write down everything wonderful that happens during your days, fold the  paper and put it in your jar or box.

Here's to many blessings throughout the year!