I love this poem. It's a wonderful reminder that even when our troubles seem insurmountable, that when we think we can no longer go on and are ready to give it all up, there is always a light at the end of the tunnel. Too often we are ready to quit when the going gets tough, but we must remember that there is an ebb and flow to life, and that in spite of those stormy days that seem frightening, dark and never-ending, the sun will eventually shine through the clouds of life. With a little faith and perseverance, we will find that pot of gold just around the next corner.

When things go wrong, as they sometimes will,
When the road you're trudging seems all up hill,
When the funds are low and the debts are high,
And you want to smile, but you have to sigh,
When care is pressing you down a bit,
Rest, if you must- but don't you quit.

Life is queer with its twists and turns,
As everyone of us sometimes learns,
And many a fellow turns about
When he might have won had he stuck it out;
Don't give up, though the pace seems slow-
You may succeed with another blow.

Often the goal is nearer than
It seems to a faint and faltering man,
Often the struggler has given up
When he might have captured the victor's cup.
And he learned too late when the night slipped down,
How close he was to the golden crown.

Success is failure turned inside out-
The silver tint of the clouds of doubt-
And you can never tell how close you are,
It may be near when it seems afar;
So stick to the fight when you're hardest hit-
It's when things seem worst that you mustn't quit.

Author Unknown
Posted by Incognito at 6:22 PM No comments: Links to this post

Email ThisBlogThis!Share to TwitterShare to FacebookShare to Pinterest
Labels: Keys to happiness, Words of Wisdom and Inspiration

Posted by Incognito at 9:28 PM No comments: Links to this post

The Dangers of Energy Drinks

Even though I'm a recovering caffeine addict (consuming more than 20 cups per day and loving every drop!), I've never understood the appeal of energy drinks. The only thing I gained from caffeine was the jitters. I drank coffee from the moment I woke up until right before bed, and it never increased my energy, nor did it ever help keep me awake. It was just a nasty habit that went hand in hand with my excessive smoking, so I gave up both over 20 years ago, and I've never looked back.

I quit caffeine before the advent of energy drinks, so I haven't had the opportunity to try one, but the thought of drinking a can full of excessive amounts of caffeine and sugar is as appealing as injecting both those ingredients directly into my veins. It's apparently the rage of the under-30 crowd, but I've seen older colleagues in the entertainment industry chug one Red Bull after another (for an extra added jolt) as if it was a cold, refreshing glass of water.
Though there have been varying scientific opinions as to the benefits, or lack thereof, of caffeine, these new-ish energy drinks have doctors concerned. Red Bull (started in Austria back in the late 1980s) and Monster are probably the 2 most notable of all the energy drinks, but 500 new energy drinks were introduced into the market in 2006, and there's even a blogger who rates them. The problem is, not only do many of these drinks contain a higher content of caffeine than a plain old cup 'o java, they often include other stimulants and ingredients like taurine and l-carnitine, guarana, ginseng, plus B vitamins. Megadoses of B vitamins can cause heart palpitations, and some people have even had seizures after drinking an energy drink called Spike Shooter. Mixing energy drinks with alcohol, as many youngsters do, can even cause cardiovascular or cardiopulmonary failure. A Brazilian study of college students concluded that those who drank alcohol with Red Bull were less cognizant of how drunk they were than those who didn't, which could lead to accidents and potential alcohol poisoning.
But it's a multi-billion dollar-per-year industry, capitalizing on the youth culture's ever-expanding, never-ending search for a legal high and our modern day, quick-fix tendencies, so it won't be dropped from our grocery store shelves any time soon.
SOLUTION:
Get a good night's sleep
Exercise regularly
Eat healthfully
Eat energy boosting foods
and toss that can away. In the recycling bin, of course!
Posted by Incognito at 3:07 PM No comments: Links to this post

Our minds need as much exercise as do our bodies, particularly as we age. There are a plethora of ways to keep our brains fit and in shape. Any kind of mental workout will keep our minds sharp throughout the years.

Reading a book that challenges us, doing daily crossword puzzles, or even playing online games that require some form of mental activity.

Prevention magazine has a section some great brain games that make it fun and easy to challenge and keep the brain active.

Have fun! But they're not easy. It is a workout, after all.
Posted by Incognito at 8:08 PM No comments: Links to this post

The Many Uses for Milk of Magnesia!

Who would have thought that the thick, white, chalky, foul mixture called Milk of Magnesia (MoM), normally used as a laxative, could be used for other health issues. Yes, according to Joe and Terry Graedon's The People's Pharmacy, Milk of Magnesia may help with the following:

1. ACNE: Rub it on face, at bedtime. One reader wrote how it helped their son's cystic nodular acne. The Graedons had no explanation as to why it helped.

2. SEBORRHEIC DERMATITIS: Rub on skin. According to the Graedons this has been known to help.

3. ANTIPERSPIRANT/DEODORANT: Spread on underarms with fingers. Some people swear by this. And, it's safe to use because it contains no aluminum. And no stains.

I have no idea if any of these home remedies actually work, but it's probably worth a try. If MoM is made to ingest, there certainly shouldn't be a problem applying it to the skin.

However, I remember being told, as a teen, that Mercurochrome was good for skin problems. So, I liberally applied it to my face one evening. I was scheduled to take the SATs the following day. When I woke up the next morning and went to wash it off, I found that nothing could remove the red splotches plastered all over my face. They failed to specify it had to be the white Mercurochrome.

Considering Milk of Magnesia is white, you should have no problems.

There are many people in this world who truly inspire, through both their words and actions. I've posted about some of them: Nick Vujicic, Patrick Henry Hughes and his dad, Team Hoyt. In spite of being handed a grim deck of cards, or living lives full of adversity, these people somehow have been able to rise above their various, extremely challenging circumstances, and have found the positive in their lives.

I want to add to my list of heroes Carnegie Mellon Professor Dr. Randy Pausch, who is dying of pancreatic cancer. He gave a last lecture at the university on September 18, 2007, and later shared some of that speech with the Oprah Winfrey audience. At 47, with a wife and 3 young children you would think he would be bitter, but rather than wallow in self-pity, after being told he had only 3 to 6 months to live, he has decided to embrace his last days with joy, fun and gusto. Although the lecture's main emphasis is about achieving your childhood dreams, it's more about living life to the fullest. He talks of how, as children, we have a certain sense of fun and wonder, and he encourages us to retain that throughout our lives. We can choose to either live in a negative state of mind like Winnie The Pooh's Eeyor, or choose to embrace life in a positive manner like Tigger.

Some of the highlights of the shortened lecture:

-Choose to live life with integrity.

-If you screw up- apologize, but he adds that there are 3 steps to a true apology: 1. Saying you're sorry. 2. Claiming it was your fault. 3. Asking how you can make it right.

-If you conduct your life in the "right" way, karma will take care of everything and your dreams will come to you.

Some very wise words from a man faced with his own mortality.

Blessings Dr. Pausch for accepting death with such grace and dignity!!

Posted by Incognito at 6:09 PM 4 comments: Links to this post

Email ThisBlogThis!Share to TwitterShare to FacebookShare to Pinterest
Labels: Inspirational people, Kudos to, Randy Pausch, Words of Wisdom and Inspiration

Too Much Sodium Equals Trouble 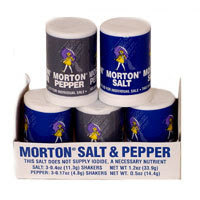 Since childhood, I have always preferred salty foods over sweets. During my younger years, when my cast-mates and I would go out for dessert, after a show, and everyone would be ordering their hot fudge sundaes and banana cream pies, I was the odd duck ordering an appetizer. And my tastes haven't changed much, since then.
I love salt. In fact, I adore it! The more the merrier. I spread those tiny, glorious crystals of sodium over pretty much everything. So, when the American Heart Association (AHA) recommends limiting your salt intake to 2,300 mg (a meager 1 teaspoon of salt) per day, you can imagine how depressing that might be. Considering so many foods have added sodium (particularly fast foods), it is estimated that the average person consumes 5,000 mg per day. More than double. In fact, the National Academy of Science suggests the human body only needs 500 mg (1/4 teaspoon) This is not a good thing when research shows that excess intake of sodium can cause high blood pressure and osteoporosis, although there is debate within the scientific community as to whether a healthy person, with normal blood pressure, needs to worry about how much salt they use. Don't get me wrong, we need salt:

Sodium regulates the body's fluid balance and blood pressure, helps the muscles relax and carries nutrients to the cells.

Just not in excessive amounts.

A research study published in The American Journal of Clinical Nutrition found that girls (ages 10 to 15) whose diets included 3,860 mg of sodium per day lost more calcium in their urine than those girls restricted to 1,300 mg per day. This has lead researchers to believe that young girls on a high sodium diet might be more susceptible to osteoporosis as they age, because of the leaching of calcium from their young bodies when they most need it for healthy bone development.
SOLUTIONS:
Limit your sodium to no more than 2,300 mg, per day.
Use more herbs and spices that are sodium free, to flavour your foods.
Try adding some balsamic vinegar to your food.
(photo: Morton Salt, they also have a salt substitute)
Posted by Incognito at 2:03 PM No comments: Links to this post