'Tis the season of sharing and giving, although that sentiment should be something we think of year round. So, in that spirit of giving, here's a story to warm the cockles of your heart, and it's the epitome of what sharing, without expectations, is all about.

Jennifer Foster, an Arizona woman, was walking with her husband in Times Square- the heart of New York City- on a cold November night when she encountered a police officer engaged in a random act of kindness.  She snapped a photo with her cell phone of the officer with the homeless man he was helping, and this is how she describes it:

Right when I was about to approach, one of [the NYPD's] officers came up behind him. The officer said, ‘I have these size 12 boots for you, they are all-weather. Let’s put them on and take care of you.’ The officer squatted down on the ground and proceeded to put socks and the new boots on this man. The officer expected NOTHING in return and did not know I was watching. I have been in law enforcement for 17 years. I was never so impressed in my life. I did not get the officer’s name. It is important, I think, for all of us to remember the real reason we are in this line of work. The reminder this officer gave to our profession in his presentation of human kindness has not been lost on myself or any of the Arizona law enforcement officials with whom this story has been shared.


Foster emailed the NYPD about what she witnessed, they asked her for a copy of the photo, which they posted on their FaceBook page, and from there it went viral. They eventually discovered the identity of the officer, who thought nothing of what he did.

[Larry DePrimo] readily recalled the encounter. “It was freezing out and you could see the blisters on the man’s feet [...] I had two pairs of socks and I was still cold.” They started talking; he found out the man’s shoe size: 12. As the man walked slowly down Seventh Avenue on his heels, Officer DePrimo went into a Skechers shoe store at about 9:30 p.m. “We were just kind of shocked,” said [store manager] Jose Cano [...] “Most of us are New Yorkers and we just kind of pass by that kind of thing. Especially in this neighborhood.”

Mr. Cano volunteered to give the officer his employee discount to bring down the regular $100 price of the all-weather boots to a little more than $75. The officer has kept the receipt in his vest since then, he said, “to remind me that sometimes people have it worse.”


Officer Larry DePrimo, at the young age of 25 already knows the true meaning of compassion, empathy and generosity. He has been a police officer since 2010, and deserves kudos for his inspiration to a world sorely lacking in compassion and generosity.  The NYPD post has, to date, 458,000 'Likes',  well over 160,000 'Shares', and over 34,000 comments.  Many people have mentioned they wished all police officers were like DePrimo, but that's not what they should be focusing on.  Any one of us can do what DePrimo did.  And it doesn't take much money. If you have little  to spare, donate your time. Or offer someone a cup of coffee like DePrimo did with the homeless man, though he says:

“as soon as the boots were on him, he went on his way, and I just went back to my post.”

It really doesn't take much to be kind, after all, we are our brothers keepers.

Thanksgiving is one of my favorite holidays.  Not so much because of the food- though I do look forward to my Tofurkey and tofu pumpkin pie, plus all the fixings- but because it's a day to count my blessings.  Of course, this is something we should do every day of the year: a gratitude journal is a good way to take stock of the good things in our lives.

Even when we don't feel so blessed, when things aren't necessarily bountiful in our lives, there is always something we can be thankful for, if only the fact that we are still breathing.

I am blessed to still have my loving and generous parents and sister. Some wonderful friends. My creative work that hopefully blesses others. A roof over my head. My health issues under control. And a myriad of other blessings, too numerous to get into.

I wish you all a blessed Thanksgiving!! 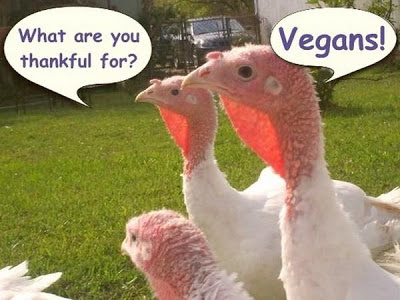 Not much I can add to this, other than don't take anything for granted.

Striving for all 12 would be optimal, but at least try.   You get an A for effort, and if you keep at it, eventually you might find yourself happy. 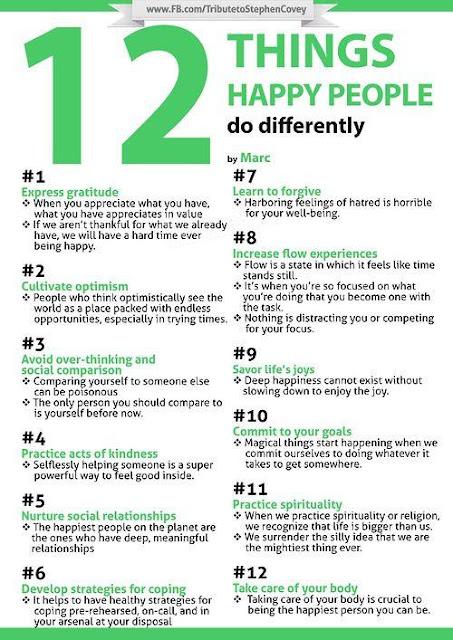 Posted by Incognito at 4:08 PM No comments: