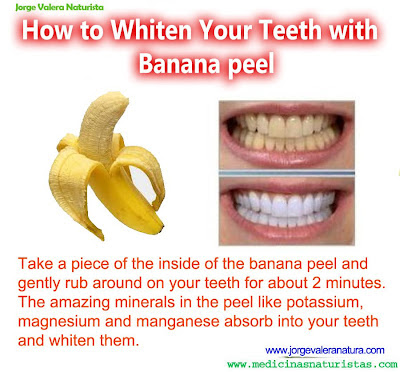 I love finding natural, alternative ways to deal with certain issues, and although I haven't tried this particular method of whitening teeth, it certainly can't do much harm. And the best part, it only costs the price of a banana.

People love having bright pearly whites, but many things can cause stains including certain foods, smoking and caffeine. There are a myriad of ways to whiten yellowing teeth- from expensive treatments at your dentist, to cheaper over-the-counter DIY processes. But those can cause problems from stripping the enamel on your bicuspids to sensitivity. One woman even comments about its addictive nature, and the potential for chemical burns and leaving your teeth even yellower.  When you think about it, the idea of putting chemicals in your mouth that  you could easily swallow isn't such a good idea.

So, here's the banana treatment.  Again, I have not tried it so I can't vouch for its efficacy, but it might be worth a try.

The instructions on E-How suggest that you can either brush your teeth first (preferably with a natural toothpaste) or after, but I would recommend brushing after to prevent plaque build-up from food deposits.  In fact, I would also floss after the banana peel treatment, and then brush your teeth. They suggest using a ripe banana since ripe ones have more potassium. Apparently its all the minerals including the potassium, manganese, and magnesium that help with the whitening.

1. Peel a banana as you normally would. Save the fruit to eat later or freeze in chunks to use in  smoothies.

2. Cut a piece of banana peel and start to gently rub the soft inside part (where the peel meets the fruit) against your teeth for about 2 to 3 minutes.

They also recommend doing this twice a day, morning and night.

If anyone has tried this, I would love to know what the results were. If I decide to try this, I will update you, as well.

Posted by Incognito at 4:13 PM 6 comments: Links to this post

Wipe Away Worry About "What-Ifs" 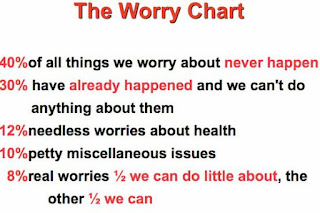 Worry is probably one of the most common debilitating problems for humanity, and something most of us battle. I remember decades ago I was needlessly worrying about two projects I was interested in, neither of which I had yet been offered,  and a very dear friend told me "there's no point in worrying until it's a problem", and he was so right. What was the point in wasting all that energy angsting over which project I would choose, when I hadn't been presented with the choice yet?  As it turned out, I never had to make the choice.

His wise words stuck with me, and I try to remember them  when I am in a similar situation.  Until something becomes a problem, until you have an actual choice to make- why worry. Most of the time, and I'd say more than the 40% mentioned in the above chart, it  never becomes issue. Furthermore, by worrying about a situation, since "worry" is a negative energy, are you potentially creating a negative situation by focusing on it?  Thoughts are energy, make them good, positive ones.  Find books that deal with positivity. Check out YouTube videos. You can get over it, or at least reach a point where you don't worry about something that isn't an issue, yet.

Here are some great tips to deal with worry.

Keep telling yourself, this is not a problem. And breathe. Deeply. And if you are a believer, "Let go, and let God."
Posted by Incognito at 1:10 AM No comments: Links to this post